A week of Wiltshire byways 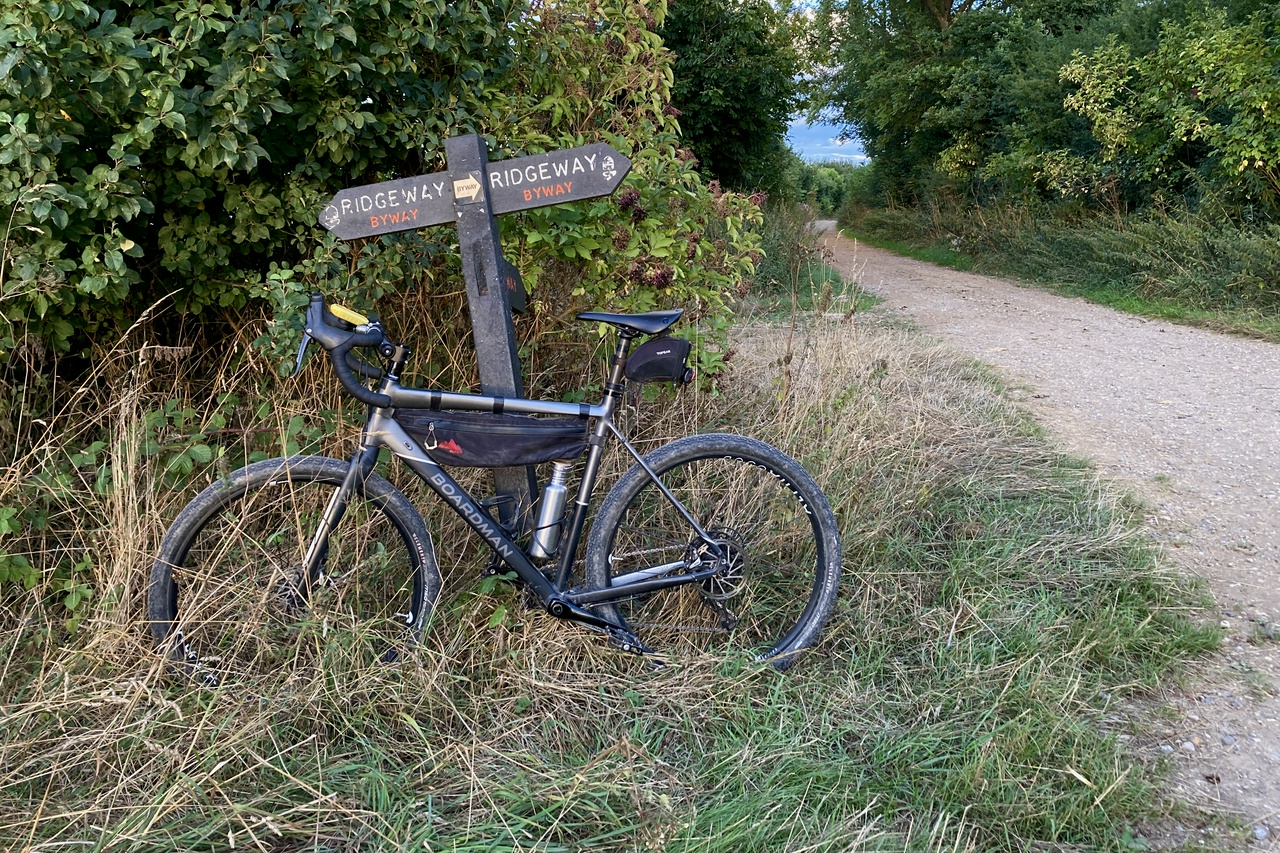 It was a late August morning, the first of our holiday, and we were keen to get going. We retrieved our bikes from the cottage porch and set off on trails which – over the next few days – would take us to a street market, a neolithic tomb and the largest stone circle in the world.

While other families joined motorway queues heading to the coast, we had travelled the short distance to Wiltshire and a holiday cottage with the Ridgeway running past its door. I’d ridden the Ridgeway twice before, but both times were solo and squeezed into limited time between commitments. This was to be a more leisurely exploration.

The prehistoric Ridgeway is famous, but a web of lesser-known byways just like it entangle the Wiltshire landscape, giving us plenty of route options. And with the dry weather stretching into late August, conditions on the chalky trails – treacherous in the wet – were still perfect for riding. When we tired of hills, the old railway path in the valley gave us the chance for an easy spin.

We took the easy option on that first morning, descending the Ridgeway from the cottage to meet the railway path, where we turned south and followed the old trackbed into Marlborough. In the wide High Street, the historic market was doing good business – including from us, with sweet and savoury purchases from the stalls filling our bags. This is also the site of the annual mop fairs, Big Mop and Little Mop – once hiring fairs for agricultural workers but now funfairs held in October. Two months too early for the funfair, we headed back to the cottage for a quieter, lazier afternoon. 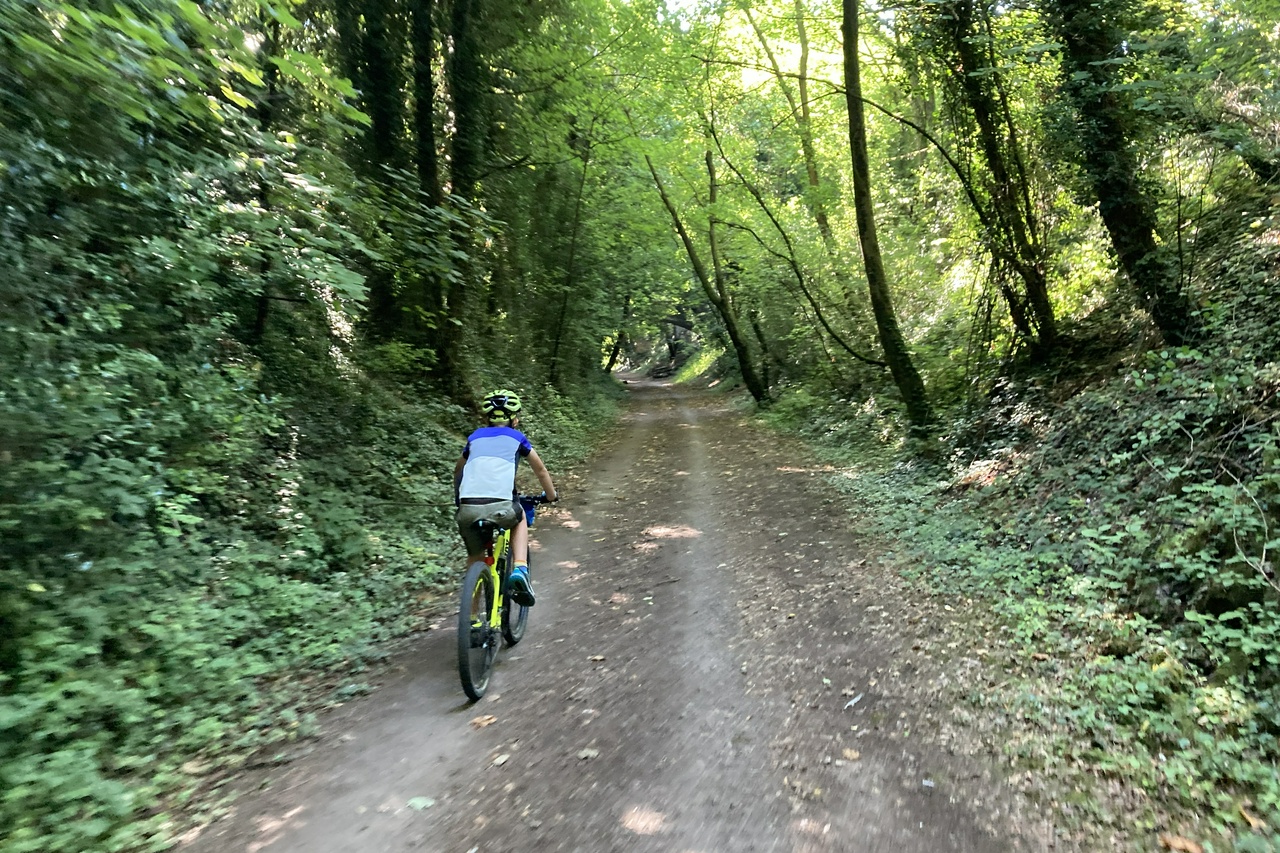 For our second ride we headed north on the railway path and then along the Ridgeway to reach Avebury, home to an enormous stone circle – the world’s largest, and the only one with a village in the middle of it. I nodded sceptically while a man walking his dog earnestly described the spiritual power of the stones. Villagers of previous centuries clearly did not share his attitude towards our Neolithic and Bronze Age ancestors: under one of the stones, archaeologists found the skeleton of a medieval barber-surgeon who they believed was crushed as he helped to bury the pagan stone to remove it from view.

Leaving Avebury, we opted to follow a different byway and make the ride back into a loop via Marlborough. It was a good decision, gravel byways between horse gallops making for easy riding as we clocked up a little over 40km for the day – plenty for nine-year-old G’s legs. Back at the cottage, we planned an easier ride for the following day: north as far as the railway path could take us and into Swindon.

What the next day’s ride lacked in sarsen stones it made up for in reinforced concrete. After following the National Cycle Network route through the outskirts of Swindon, a spectacularly brutalist bridge took us over the motorway. Rising out of scrubby woodland either side of the M4, it felt like something left behind by a lost civilisation – one that used to know how to get around by walking or cycling. 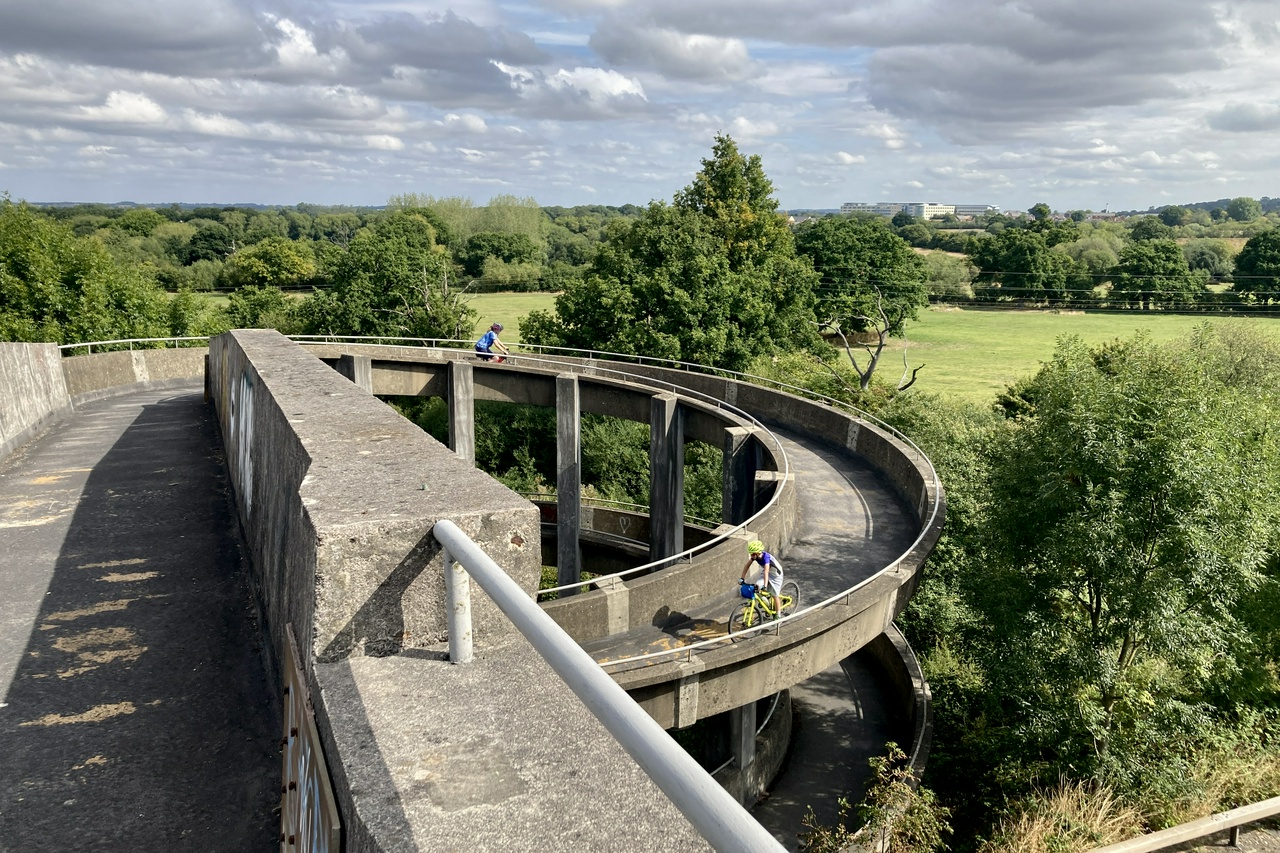 We were soon at Coate Water, where the sense of abandonment continued. Although recently restored, the Grade II-listed disused concrete diving platform still looked forlorn in its modern role as an over-engineered pigeon perch. The kiosk by the lake was open, though, so as we sat on a bench and defended our snack from the birds, I searched online for more details about the diving board.

I learnt that the official opening of the diving platform took place on 22 June 1935. During the ceremony, the diver, Miss Cicely Cousins (later to become the national diving champion) gave a demonstration of ‘fancy diving’. There was no fancy diving on display for us, and not much of anything else going in the park. Its crazy and pitch-and-put golf courses were closed, perhaps permanently, but locals brought their own clubs and played anyway. 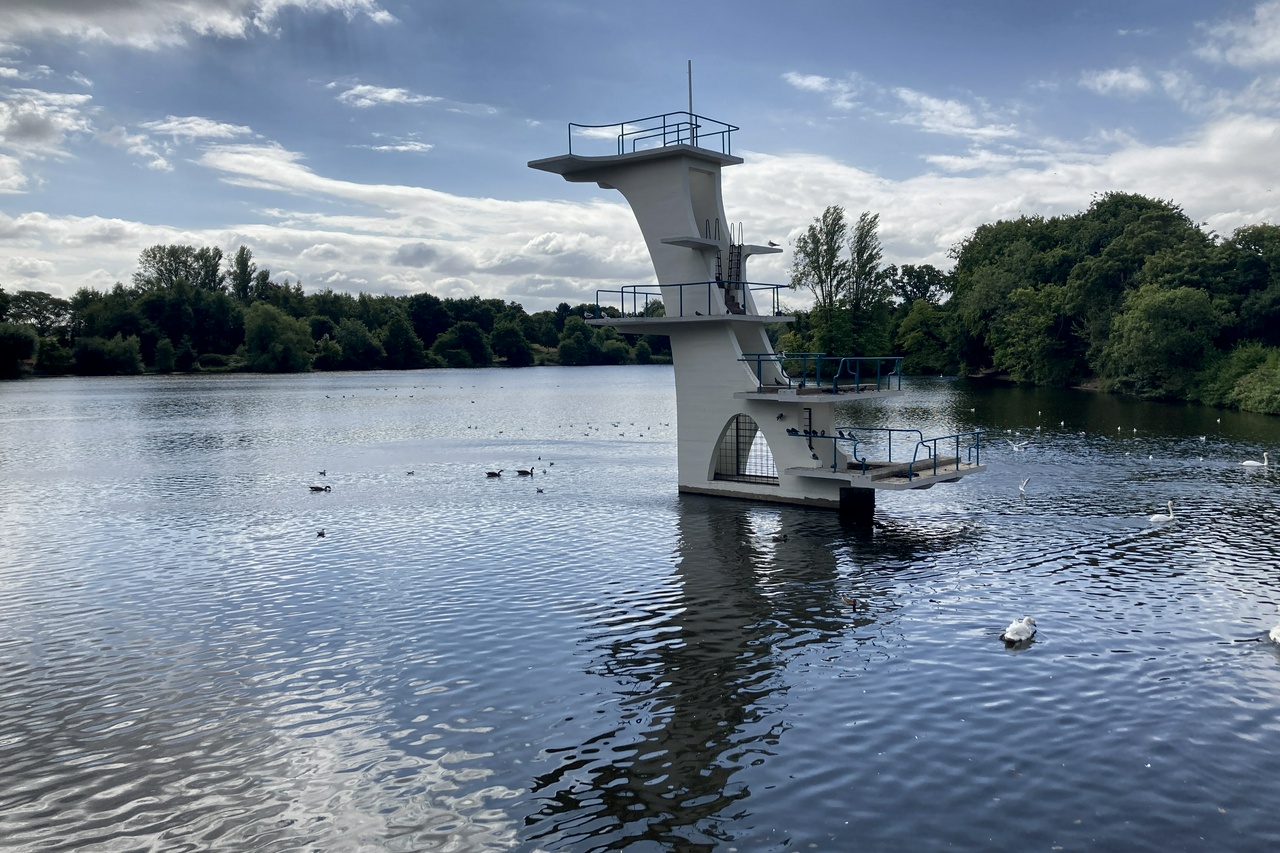 Retracing our route we headed back to the cottage to enjoy the evening sun in the garden and plan the last longer ride of the trip: east on the Ridgeway to see the neolithic long barrow at Wayland’s Smithy and the Bronze Age Uffington White Horse. As we set off the following morning, we pedalled through patches of chalk grassland, rich in biodiversity, but also vast areas of industrially farmed monoculture – cereal crops planted, tended and harvested with massive tractors, gallons of fossil fuels and litres of herbicide.

It was in stark contrast to how the people who built the two phases of Wayland’s Smithy to inter their dead must have lived. Or to the ways of the people who came later and, unable to fathom what the barrow was for, thought it to be the home of Wayland, the Saxon god of metalworking. According to tradition, if you leave your horse tethered at the long barrow, together with a small coin, then Wayland the invisible smith will magically reshoe your horse while you are away. As we didn’t need any new tyres on our bikes, we pressed on towards Uffington White Horse. 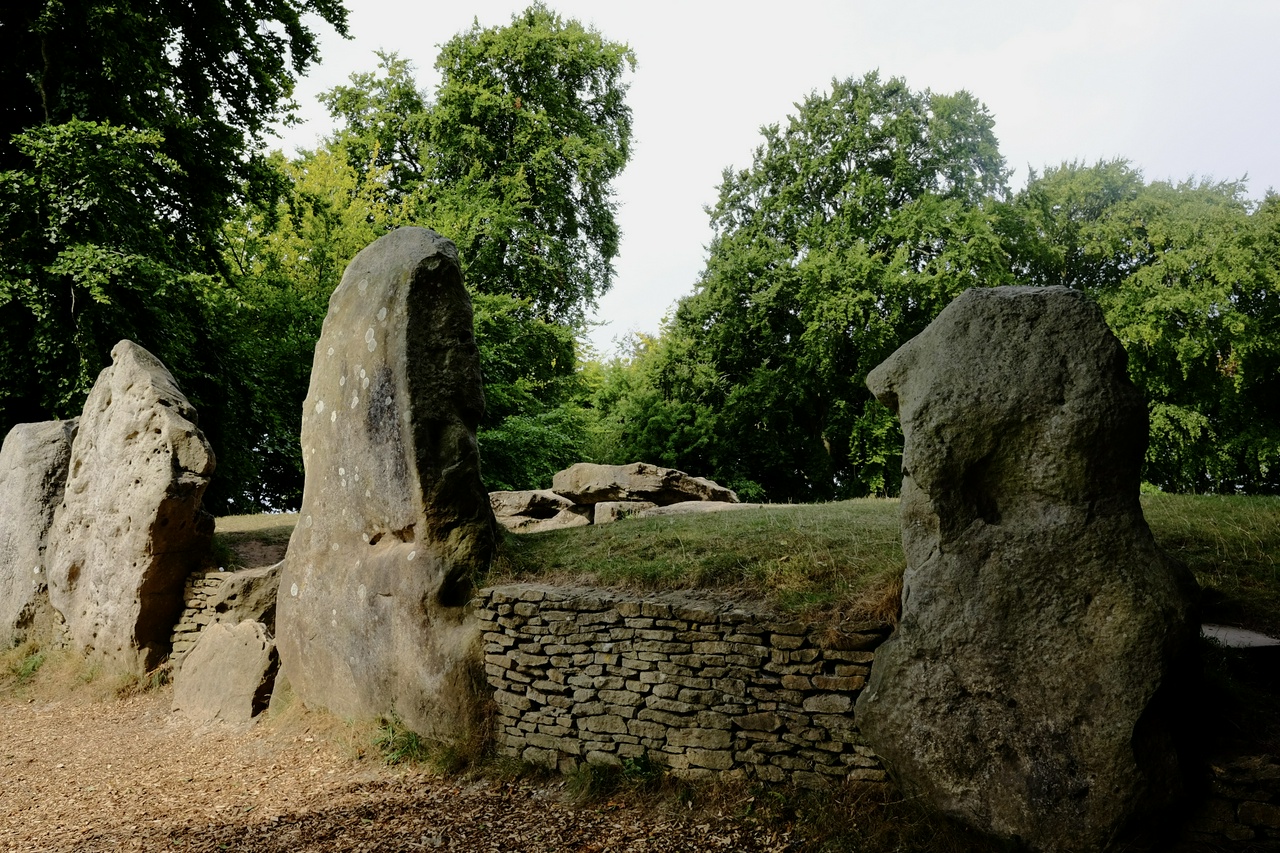 I’d passed this way twice before but on those occasions, having already stopped at Wayland’s Smithy, I hadn’t paused to take in Uffington Castle and the White Horse below it. The ‘castle’ is an Iron Age hillfort, regarded as an outstanding example; the horse, created by stripping the soil down to the white chalk, is thought to be later Bronze Age or Iron Age. We left the trail and pushed our bikes down the hillside but it proved tricky to find a spot where we could really appreciate the stylised form of the horse.

I later learned that the chalk visible today may be only part of the original: aerial surveys have revealed a larger, more conventional shape of a horse beneath it. The change of shape is attributed to the top soil slipping and also to repeated recutting. Once every seven years from at least 1677 until the late 18th century, local people held a midsummer ‘scouring festival’ to clean the chalk outline of the horse and enjoy a celebratory feast within the hillfort.

We celebrated with a feast of our own, polishing off the remains of our packed lunch. Then we pushed our bikes up to rejoin the trail and set off back to enjoy our last evening in the cottage.