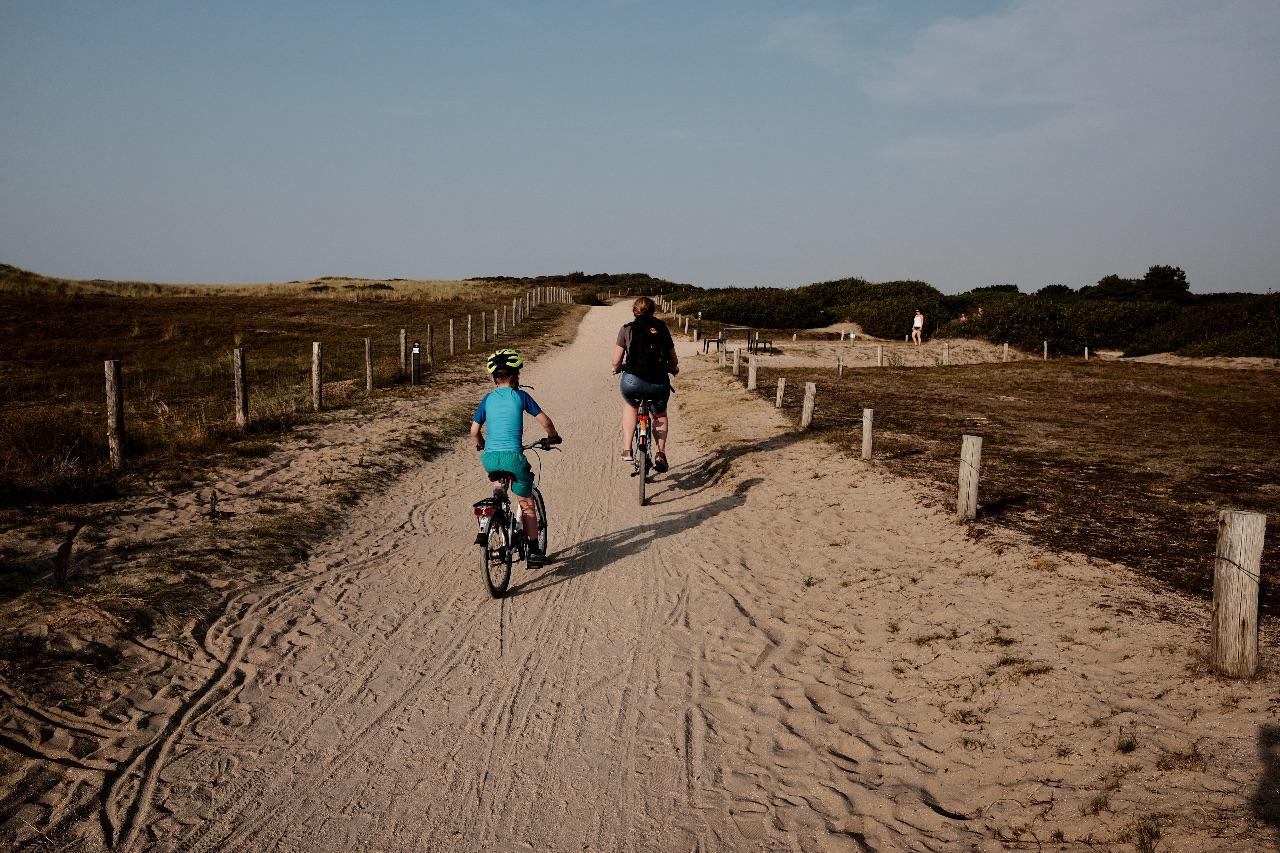 We pedalled away from our hostel – a converted thirteenth century castle – on the bike paths that run through the forest and nature reserve, before parking up in the dunes and heading to the beach.

This was a perfect place to explore by bike. This was why we’d come to the Netherlands for our family holiday.

We were in Domburg – a seaside resort in the Walcheren area of Zeeland. A ferry, several trains and two buses had brought us this far, and now, for a precious few days, pedal power would take us anywhere we wanted to go. The cycle paths are ubiquitous, traffic–free and very flat. Perfect for even the youngest of children to cycle independently.

There were other families like us on the beach. Most got there the same way we did – on bikes. Many had brought a lot of stuff with them: windbreaks strapped to top tubes, picnic hampers on rear racks, dogs towed in trailers. They left their bikes in cycle parks in the dunes and carried the equipment the final few hundred metres to the beach.

And what a beach it was. The sand appeared endless – and flawless. There was no litter; showers and toilet blocks were discreetly and handily placed along the beach. With cycling the predominant mode of transport, there is no need for the ugly car parks, traffic congestion and pollution that blight seafronts back home.

An unseasonal heatwave has brought everyone to the beach, but there seems to be room for all. After some sandcastle construction we took to the sea to cool down, the normally frigid waters warmed to such a degree that they felt refreshing rather than icy.

After a while, with the temperature pushing 35C, we decided it was time to head back to the hostel through the shade of the forest. We had hired our bikes to potter around locally, but it was clear from the array of solos and tandems outside the castle that other guests were passing through on tours of the North Sea cycle route, which runs right past the hostel door. We vowed to do that ourselves one day.

Over our few days in Domburg, we explored southwards to Westkapelle and inland – passing back through Oostkapelle to stock up with food at the Jumbo supermarket. We learnt as we went along: mostly about cycle-friendly Dutch culture but also about the history of the area – from Viking incursions to the Second World War battle for Antwerp, which saw the Allies flood Westkapelle to thwart the Germans. Out of the destruction of war, and from the clutches of the North Sea, the Dutch have created a society in which we felt welcome.

Our trip came to an end and all too soon it was time to head to the ferry. As we waited for our train, we watched a fellow passenger make her way to the platform. She was carrying two young children – as well as all the equipment they needed for a day at the beach – on her bike. The lift to the platform easily accommodated them all. When the train arrived, there was plenty of space for her, the bike and the kids.

Goodbye The Netherlands, we’ll miss you.